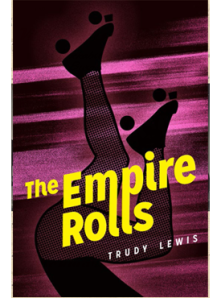 The Empire Rolls is a novel about roller derby, DIY culture, private space, public land, and the changing landscape of the Midwest just before the economic crash of 2008.  Sally LaChance is a Missouri park ranger and the emcee for a local roller derby team, the Boonslick Bombers. When she loses her temper with an arrogant band of industrial polluters, she puts her job, her reputation, and her life at risk.

Buy the book from the University of Arkansas Press:

Buy the book from Amazon:

Buy the book from Barnes and Noble:

The Empire Rolls Trailer: a film by Brian Maurer

Advance Praise for The Empire Rolls:

“Roller derby, menace and mayhem, the limits we stretch, the lines we cross, the lives we make. At its heart, The Empire Rolls is a love story, and Trudy Lewis is a writer of enormous gifts.  Pay attention.  We’re out on the jam, and who knows what may be waiting around the turns.”

“Trudy Lewis is that rare, fearless writer who is unafraid of revealing the shadow side of our culture.  In her new, masterfully-written novel, The Empire Rolls, she invites the reader into the heart of the heart of the country, to a mid-sized Midwestern town, where intimate relationships, and even love itself, are twisted out of shape by the forces of war, greed, and inequality.  Written in electric, page-turning prose, Lewis turns her exquisitely tuned ear to the private lamentations that trick down from public woes,  In the tradition of her contemporaries Russell Banks and Richard Russo, Trudy Lewis tells a compelling story that conveys with consummate insight the depth and texture of ordinary lives–how personal identity is profoundly altered by public events.  This bracingly intelligent novel is a book for our times.”

–Dale Kushner, author of The Conditions of Love

“From the first scene at the roller derby I was whipped into the jam of The Empire Rolls.  You will be too, as Sally and Jared, all-too-human, fight industrial pollution, the body’s frailties, and their own self-destructive tendencies in this compelling, touching and humorous quest to find their way.”

“In this sharp, sensuous, powerfully observed novel, a handful of human beings in an embattled Missouri town struggle to make sense–to make lives–of what’s given, bringing scrappy ingenuity, and, ultimately, love to the arena.  Tough, lonely, soul-scouring Sally LaChance is someone we never what to leave.  Howling loss is here, and desperation–but so is nerve, curiosity, bittersweet sex, and hard-bargain-driving luck.  It doesn’t take long to recognize pieces of ourselves, and (turning pages faster) to worry and cheer in equal measure.”

–Joan Frank, author of Make It Stay and Because You Have To: A Writing Life

“Skillfully written, with abundant heart and insight.  I hope to see more from this writer in the future.  I expect I will.”

–Charles Yu, author of How to Live Safely in a Science Fictional Universe.